We arrived into the city on water: Venice. We saw the plaza, the Doge palace, and got a feel for what Venice and the Venetian Republic would have been like a long time ago. When the Ostrogoths invaded Italy after the fall of the Western Roman Empire, a small group of people retreated into the swamps of northeast Italy to seek shelter. They built their city on densely packed wooden poles, driven deep into the mud underneath. These were the early Venetians. Their kingdom grew, and at the time of Marco Polo, in the 1200s, the Venetian republic was at its height. A trading capital to the east and China, it was one of the leading European economic and trading powers during the Middle Ages and the Renaissance. But when the Portuguese sailed around Africa, the Spanish discovered America, and the rest of Europe rose into power, the great Republic of Venice began to go into decline.

And here we are now, in the tourist-packed, site-seeing city of modern-day Venice. Streets lined with shops, tall buildings everywhere by your side, hugging you to death. And of course, the classical gondolas (canoe-type boats that you can ride in Venice).

Venice also has some problems. Climate change is affecting the tides of the water in the Adriatic Sea, and Venice has been having some recent flood issues, and some days different parts of Venice can be inches, or sometimes even feet deep in water. Also, Venice is sure popular. Every street is packed, and tourists are around every corner. I almost heard more foreign languages that the native Italian. Because of this popularity, there is a city tax just to be in the city. It is 3 euros a person. Each person who spends the night in Venice has to pay the government money in order to sleep in the City of Water.

Breakfast was rock bottom. We used leftover plastic water cups from our yummy Italian pizza dinner the night before and put a surprisingly small amount of yogurt inside, combined with some dried fruit and oats. We each ate about one cup’s worth of yogurt, oats, and fruit. We would eat more later.

We had promised to meet a friend of ours, Kavita, at her Airbnb this morning. That’s why we had to get going fast.

We checked out at 10:30 and soon we arrived at Kavita’s and walked around Venice a bit. We passed through shops and alleyways, and then eventually stopped for lunch at the pizza place that we had eaten at twice before. You could buy them by the slice, and we sat down and had a filling pizza lunch. I thought about Venice. I loved being there, and it felt so peaceful, with the quiet and serene bridges and arches that span the canals. Gondolas would quietly row past under you, and you could just stand there, with the gentle, chilling breeze blowing through your hair, and reflect on your time here in the Floating City. Other times you would be surrounded by tourists and people, and you couldn’t even think over all the loud noises of people talking, boats honking, and the sea roiling.

We walked around until we arrived at the big plaza, the big, center square of Venice. Yesterday we visited the plaza, and from that one spot we could see about 4 big, grand buildings that were from a long time ago. Today almost the whole plaza was flooded. Water was slowly coming out of the drains in the ground, and as usual, there were seagulls and pigeons everywhere. Next to the plaza some shops couldn’t even open, because the water was right up to their front doors. The water was a mix of seawater and freshwater, and maybe, it might have had a little bit of sewage in that mix. People were walking around in the water, with waterproof covers tied around their lower legs. It was a whole different place today. In fact, many days the plaza is flooded, and we were lucky yesterday to get there on a day that you could walk around the whole plaza.

We walked to the waterfront, and found that the tide was much higher. Yesterday, we walked up to the edge of Venice, and the start of the grand canal. Venice is like a big island, and snaking through it is the grand canal. The grand canal is about 100-225 feet wide, at different points, and connects and branches off at various points to a maze of smaller canals. It is only about 17 feet deep, and stretches more than 2 miles through the whole of Venice. A long time ago, sailors would come through the Mediterranean, sail up the Adriatic Sea (the sea that separates the Appenines Peninsula from the Balkan Peninsula), through the islands around Venice, and to the port on the southern side of Venice. Back then, almost the whole southern side of Venice would be lined with sailboats. Today, there were gondolas, water buses, and water taxis. Next to the port, there are 2 big pillars out in the open. They stand side by side and mark the entrance to Venice. Sailors and traders would walk in between the landmarks and enter the Queen of the Adriatic (Venice). The port of Venice was a very important place during the time of the Venetian republic.

We returned to Kavita’s airbnb, and rested there while Kavita, Alex, and Janet went down to have a drink of some wine. By the time they got back, we had to get going. We were in a hurry to catch the train back to where we were staying with the Mitchells (Colleen’s family). We raced out the door and walked quickly to the station. We saw the train. It was going to leave in 1 minute. But Alex was off getting tickets. 40 seconds. There he was. Here he came. 30 seconds. Phew! The train left at 8:05. We got on it at 8:04 and 30 seconds.

We headed back to the loving home of the Mitchells. Sadly, our stay there was already more halfway over. 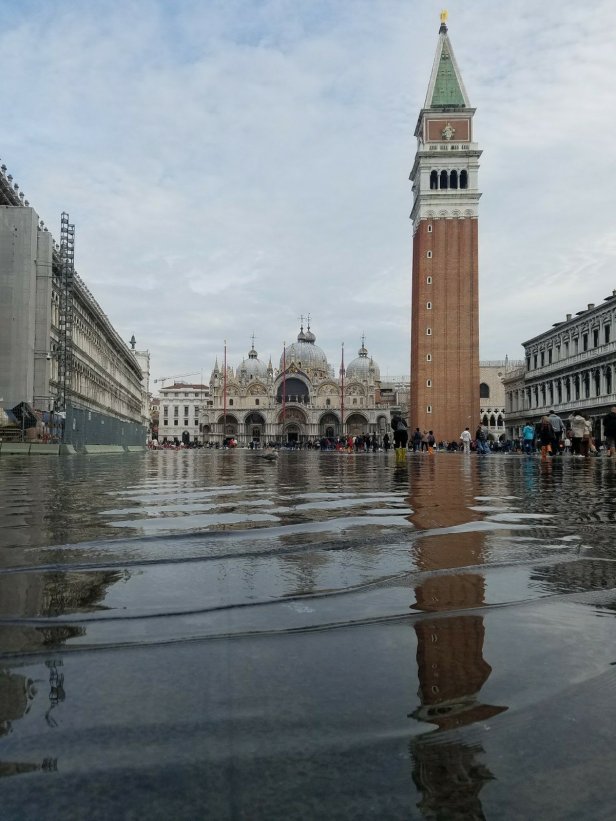 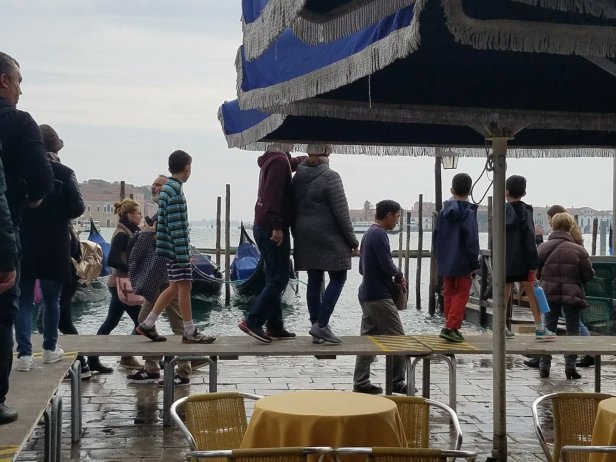 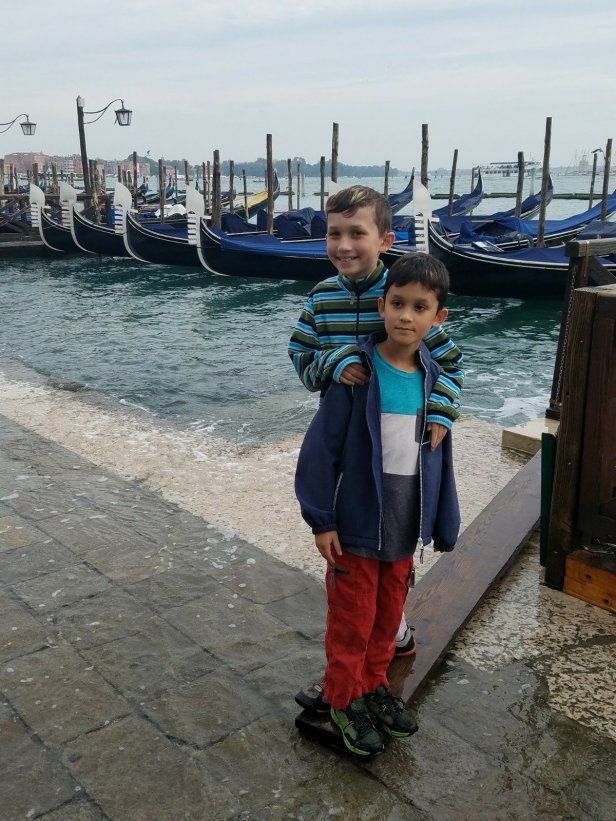 Below: Breakfast (not as good as it may look) 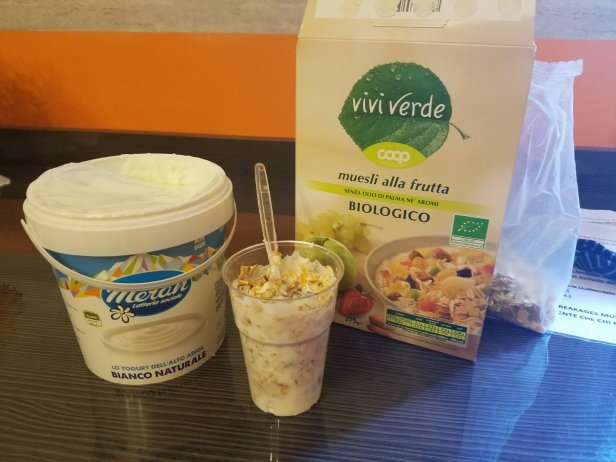 Below: We saw this (for Brian and Angie Gibson)! 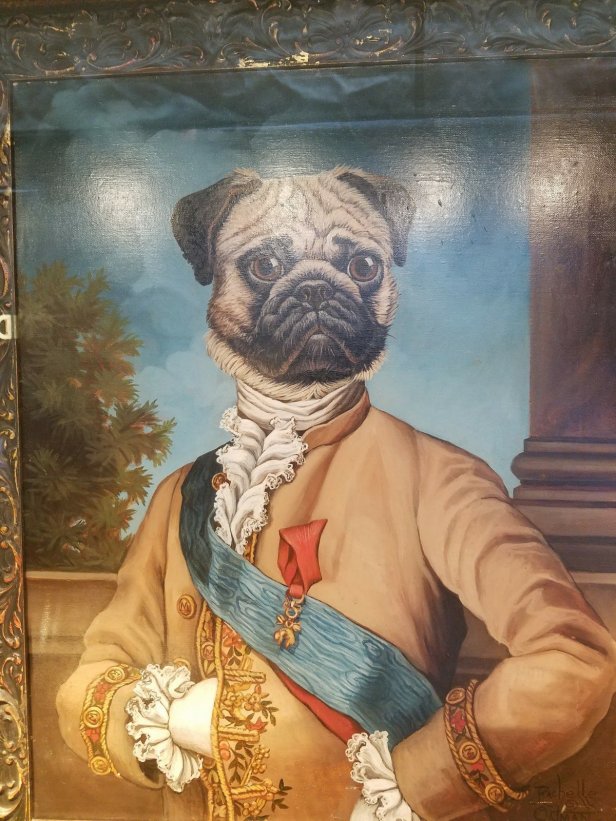