Today, we took a van to a city called Mto Wa Mbu. We mostly went there to see a Maasai market (the Maasai are an African tribe) that happens one day every month. We first wanted to look around the town so we looked around and when we were looking around we saw a bike rental place and we had been wanting to rent bikes in Arusha but there were too many cars and motorcycles. Also the roads were much flatter in Mto Wa Mbu. So we decided to check it out.

We got some bicycles and found a little road to ride on. It was a little difficult because we had not rode since Seattle and it was quite rocky. It was beautiful with corn fields and banana trees. We came to a dead end soon and turned around. We got off of the tiny road, pedalled along the main “sidewalk” for a while, and got really hot and sweaty, so we entered another shady side road.

We continued on the gorgeous winding road with sprouting corn fields on the right and tall meadows of rice on the left. Every once in a while a tree of some sort would pop up. In those trees would be charming orange flowers and boys picking the fruits. Children would come back from school and tap our hair and skin because they generally do not see white people and wonder what our hair feels like because hair is so different in Tanzania. They also got very excited when they found out what happened when they said “Julien!” because we always had to call Julien because he was always getting too far ahead. We entered a tree patch where we turned around.

We found our way back to the beginning of the bike trail and took something called a tuk-tuk to the Maasai market. We walked a little around the crowded market and saw stuff from pottery to vegetables to bananas to fruits. We did not spend much time in the Maasai market and quickly headed home. It was also Alex’s birthday so we got a birthday cake!!! Alex decided to stay home and take a day to himself that day. 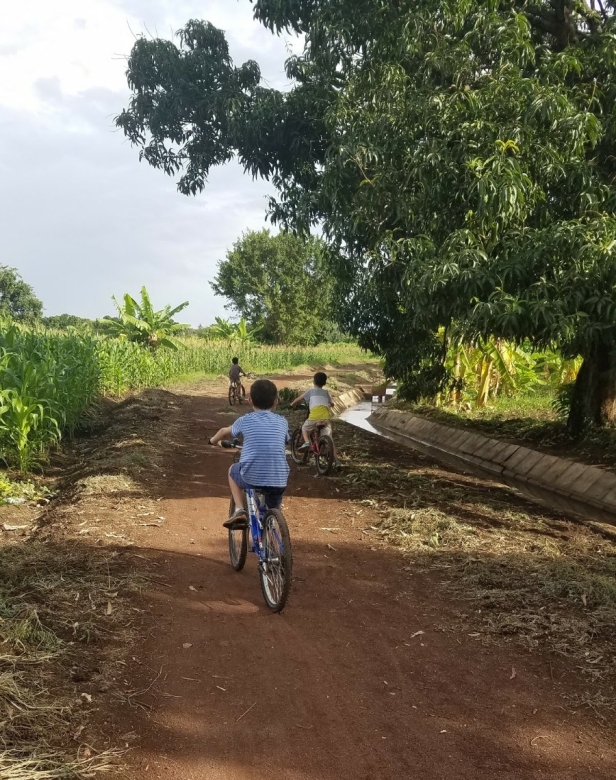 7 thoughts on “The Bike Ride”