We had arrived last night to the Tanzania Bush Camp, and eaten the most wonderful dinner imaginable. Now we had eaten the best breakfast imaginable. We packed boxed luches for while we would be out. I could not believe how good the food could be here out in the middle of nowhere. There were actually storks out behind the kitchen, so we think they eat the food scraps. They are maribu storks. They kind of look like hunched over humans, because they were huge. The people at the camp were sooooooooooooooooooo nice, and once again, the food was amazing.

I reccomend you all watch The Circle of Life, from The Lion King. It is the first scene in the whole movie, and the best song in the whole film. We have basically seen every single animal that you can see in that song. You will see some storks that have droopy red necks, that walk in a pond, and then fly past a waterfall. Those are the maribu storks, and we’ve seen them with our own eyes. Unbelievable, right? See if you can spot the elephants walking under Mt. Kilimanjaro. When the baboon holds up Simba, and the rays of sunlight peek through the clouds, we have seen that sky. We haven’t seen the bird that Zazu is, though.

When they gave us a tour of our tent (fancy tent because we were glamping), they refered to the bathroom as the “Happy Room.” So we started using the word. We said “I need to be happy,” when we needed to go to the bathroom.

Every single place we have stayed on safari has been very fancy. When we started this safari, we had a choice of either staying in Normal accommodations, or in Luxury accommodations. I am in disbelief how fancy that was, even though we pressed the Normal button.

Hyenas are scavengers and hunters, so sometimes what they do is they eat the lion’s leftovers. That is what we did at the dinner table. Janet was the hyena, and Kieran was the lion (Kieran eats and Janet eats the leftovers).

Later during the day I was feeling the wind on my face as I zoomed through the savannah, while standing up in the van that we were taking. We got really lucky on our safari. We saw many things that most people don’t get to see, and we got the best safari guide, Emmanuel. Emmanuel knows his stuff, and on top of that speaks excellent English. We were not schooling on that safari, but we were learning a lot about the animals and the way that they live.

As the day went on, the constant excitement of getting to the migration stuck to me. We were taking a long drive to see The Wildebeest Migration. There are huge herds of wildebeest that migrate all over the Serengetiand , so we decided to go see them.

On the way, we passed many interesting things. We passed Helmeted Guinea Fowl (elephants almost trample them in The Circle of Life), and leopard tortoises, who have such low metabolism that they only have to eat twice a year. We passed mongooses and waterbuck (pictures at the end of the post), ostriches and antelope. I loved driving and stopping to look at these unique animals.

On the way there, we stopped and saw a serval cat. It was like a mini leopard, and we barely got to see it hunting in the grass.

More gazelle, with their little tails and strong horns. They are Alex’s favorite. Emmanuel’s (our guide) favorite are the warthogs. Kieran likes the wildebeest. Jasper likes the elephants. Janet likes the giraffes. I don’t have a favorite.

We passed a leopard in a tree, and apparently the leopard had dragged its prey into the tree with it, and left its half-eaten body dangling in the branches. It was a gazelle. The leopard sat on its branch, proudly resting with a full belly. We passed more lions (not as cool as the lions we saw with their kill (see Kieran’s post)), and finally we saw the wildebeest on the horizon. Huge swaths of them, about 3,000,000 of them. That’s almost as much as all of the Seattle metropoliton area! The whole wildebeest migration could literally drink a whole river dry, which is why we almost caught them drinking from a hippo pool. We saw them looking at the pool, thinking if they wanted to get close to the pool to drink. They looked thirsty, but they were hesitant for fear of crocodiles. From our vantage point, we could see that there were crocodiles. Sadly the wildebeest said no to drinking from the pool. That meant that we couldn’t see the crocs try to get some juicy wildebeest. Dang!

We saw how safe the wildebeest in the center of the herd must have felt. On the drive there, we saw a group of 6 wildebeest, running quickly through tall grass to catch up with the rest of the big herd, who could have been easily 30km away. I would have felt scared if I were them, because the tall grasss that they were running through could serve as a hiding spot for some predators.

Being a lion is no easy feat. I used to think that being a lion would be fun. Everybody was just scared of you, so all you had to do was to walk in there and pick something to eat. But no, hunting is strategic. you have to wait for the right possible moment to strike. Some prey are faster or bigger than lions, and have their own defenses. I thought about this when we saw a lion hiding behind a bush. She was waiting patiently for the wildebeest to get a little nearer. To be a lion, you had to be a patient hunter. You had to find a herd, get close to it, and then maybe catch one of them. Giraffes, zebras, and ostriches can all kick, and hard. Hunting is dangerous for a lion. The lioness was some 100 yards away from the herd of wildebeest, and she knew that if she stood up or ran at them, they would all scatter and run away, and she would be left with nothing. She did not look ready, but rather in a relaxed state, meaning that she was not expecting the wildebeest to come close anytime soon.

I suprisingly didn’t know this until we started the safari, but male lions don’t hunt. Their manes interfere with hiding. Females don’t have big, bulky manes, so it is they who do the hunting. Then, you might ask, why do males even have manes if it gets in the way of hunting? It is a sign. The size and coloration of the mane serves as a signal to other lions about the lion’s health.

On the ride back we saw more waterbuck, and a big bull elephant. He was tromping nearer and nearer to us until… another safari van pulled up super fast and startled him. I looked over at the other van and they were wildly snapping pictures. Classic.

Then we got to see our first cheetah. She was in tall grass, standing up for 1 minute, and then crouching down for another 10. She was probably eating something, and keeping an eye out for vultures at the same time, because vultures would most likely attract hyenas and lions in the area, who would harm or even kill the cheetah for its meal.

I feel so grateful to have this experience. 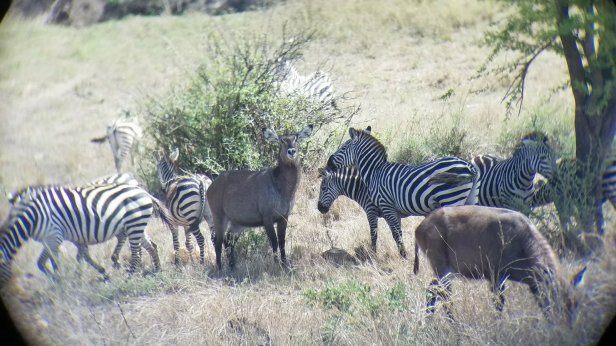 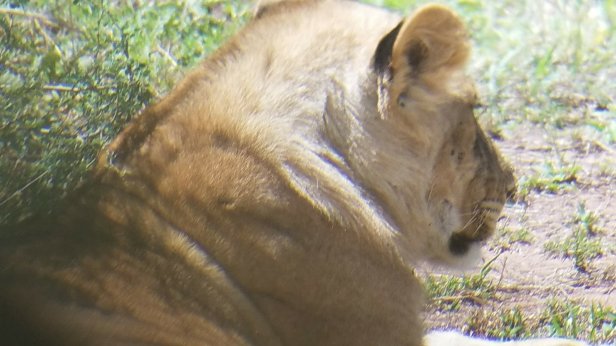 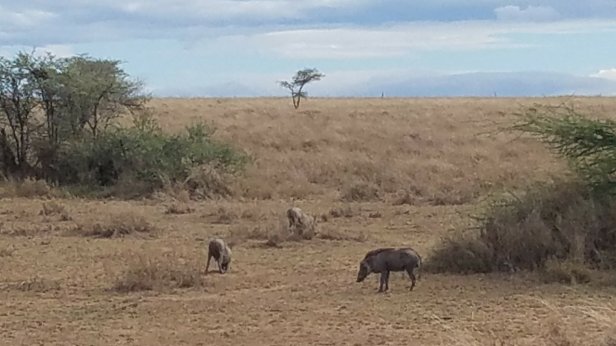 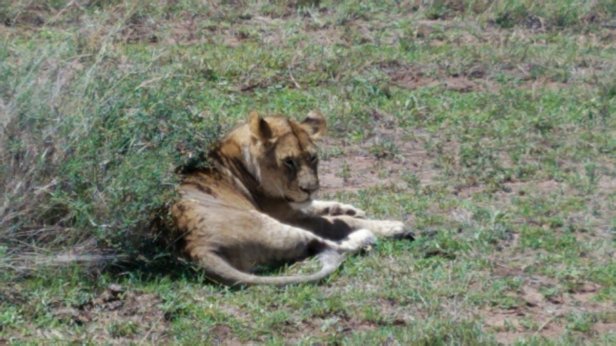 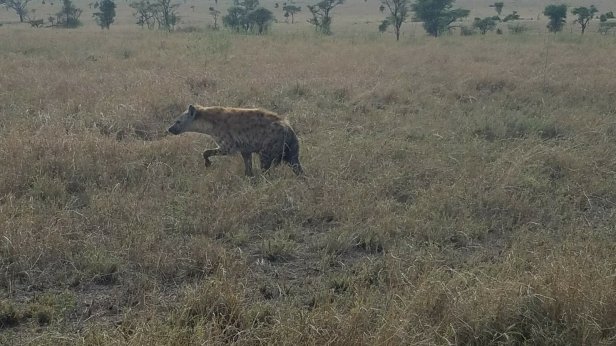 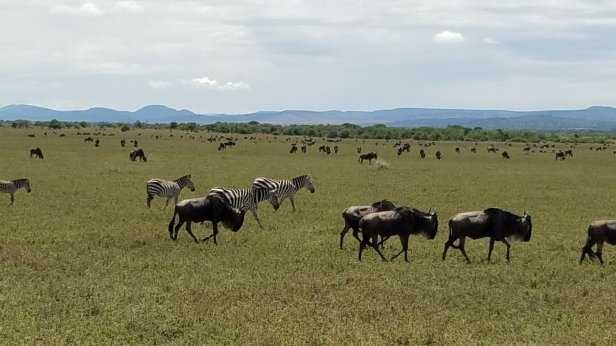 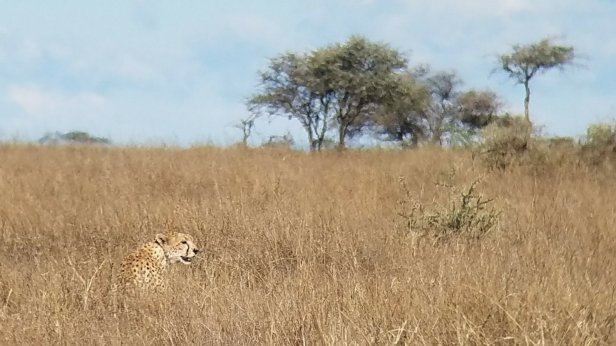 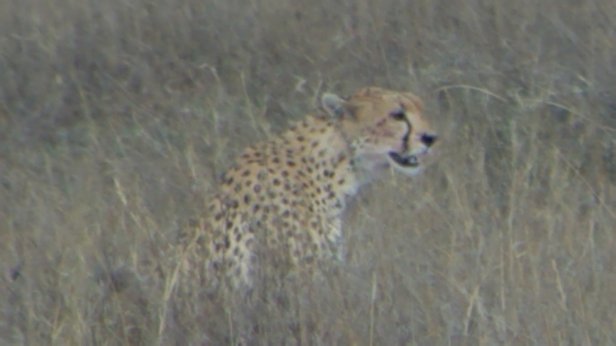 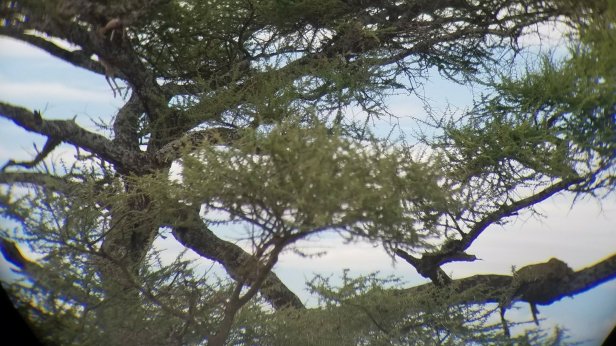 Below: Us Standing Up 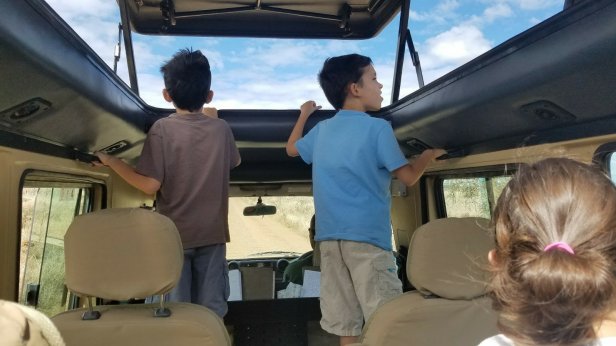