Yesterday, we started persuasive essays. We were going to choose a topic that we had experienced and we would try to convince the reader to agree (even though we are not going to send it to anybody). Kieran wrote about rhino extinction, Julien wrote about haggling, and I wrote about whether to visit Maasai villages or not. I wrote three paragraphs. The first was about my argument and who the Maasai are. The second paragraph was about why we should visit the Maasai villages. The third (and last) paragraph was about the cons and how to avoid them. Here is my persuasive essay:

The Maasai are a warrior tribe that herds cattle for survival. Thay live around northern Tanzania and southern Kenya. However, the Tanzanian goverment is taking the land and sellng it to private companies. It is a problem because many Maasai are being forced from their homeland into cities and towns. Some Maasai have opened their villages for tourism. I believe that visiting these villages is a good way to support the Maasai.

The problem with the Maasai losing their land is that it destroys their culture. The cattle need a lot of land for grazing and if the Maasai don’t have their cattle and land, they are forced to adat to the modern culture. The Maasai are starting to add more vegetables into their diets, wear more modern clothes, and otherwise alter their culture. I believe that we should go to these Maasai villages because it gives them money which helps them sustain their life in their homeland. It also lets people engage with the Maasai culture, and vice versa.

However, there are downsides to visiting the villages. When visiting, the Maasai may try to do something entertaining, instead of leading their normal life. But, they still lead their normal life for most of the time, and there are plenty of Maasai that don’t get visited by tourism. Another problem is aggressive selling of souvenirs, but you can just smile and decline or say “Hapana Asante”(no thank you). But in all, you are supporting them and helping them to keep their homeland.

That was my persuasuasive writing essay. Janet helped me a bit with improving and proofreading, but that was all. What do you think?

Below: us doing homework at one of our favorite lounges 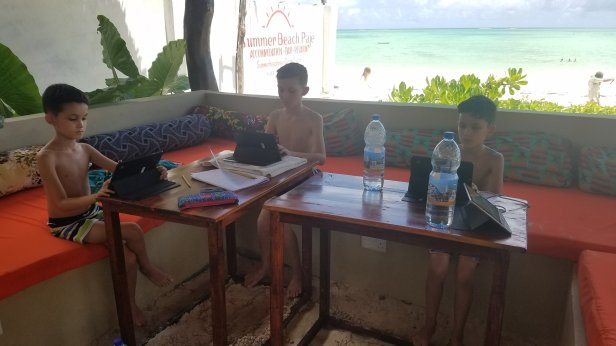 Below: The Maasai doing dance at Ngorongoro crater 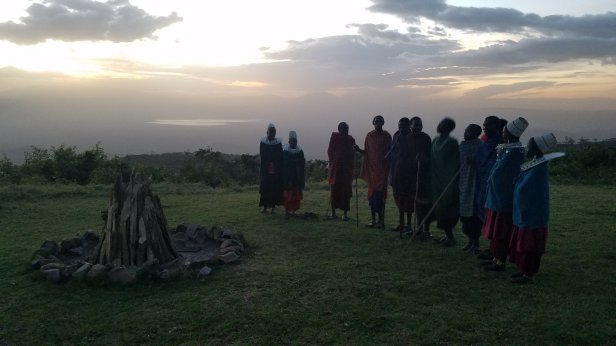