During our time in Chiang Mai we have activities that we have planned for. We have just recently moved from an airbnb that we stayed in for five days to one that we will be spending just over two weeks in. We have a lot of time to settle in. We got to meet the owner, Peter, and his adorable German shepard Tank. Sometimes we go on walkabouts around the city or just stay at home doing schoolwork. We have planned two Thai cooking classes, a trip to an elephant sanctuary, and a meditation retreat. Alex and I will be attending the meditation retreat, and all five us us will go to the elephant sanctuary. We thought that it might be a lot to handle two adults and three kids in one cooking class, like a big family outing. So we decided to spilt it up. Janet and I will be attending one cooking class, while Alex and the twins will be attending another. Today was the cooking class for Janet and me.

The cooking class lasted from 8:00am until 2:00pm. We made our own breakfast and lunch. We usually like to sleep in these days, but Janet and I woke up early to catch the van that would come and pick us up.

It was a long drive out of the city, passing a local market where our guide showed us (a group) some of the spices and herbs that are included in Thai cooking. So many names of plants that were impossible to remember.

At their cooking school, we first got to look at their garden. We had aprons and the big straw hats that made us look like those classical farmers with their overalls and hats. We walked around, walking past rows of basil plants and chili peppers, and so many herbs and leaves and fruits it almost made me dizzy.

The Thai have a special way with their cooking. Thai food and Indian food were some of my favorite dinners back in Seattle. The delight that would rush through me when Janet would bring back Thai or Indian take away, and we would all stuff ourselves to the brim with the delicious food. Going to India and Thailand, they are very different experiences food-wise. In India, we thought we would be stuffing ourselves like pigs with the ethnic food of India, but it turned out that we actually went more for Western soups and pastas instead of the masalas, curries, and paneer that India has to offer. I like American Indian food better than Indian Indian food. Thailand was the dead opposite. I would much rather eat Thai Thai food than American Thai food.

They prepared the ingredients and gave us the instructions. A lot of Thai food involves a wok. For example, the Pad Thai that I chose to make: you throw in the sauce, garlic, and oil and then add all the noodles and vegetables. You stir it around in the wok, heating it by a gas stove underneath. And then voila!, you have a delicious serving of Pad Thai.

After we made each dish, we got to sit down with the other tourists and eat it. Our group consisted of four Americans (including Janet and I), two Koreans, a Brit, and a group of four Malaysian tourists. We got to know the other 2 Americans. Their names were Sam and Hunter. Sam was from Atlanta and Hunter from South Carolina. It turns out that they are on a four-month trip throughout Asia and Oceania. They have already visited China, Vietnam, and Cambodia. They are planning to go to Malaysia, Singapore, Indonesia (and Bali!), Australia, and then New Zealand. They were flying to Malaysia that day.

It was really fun talking about our travels and their travels with them, about our experiences and perspectives, and also talking about places we’re going to go, like Bali, Cambodia, and South America. It was also really special eating the food that I had made. I had made other food, but this was special. It was like it was my doing, because I made it, but it also felt like a part of Thailand because it was their food. I love Thai food. I loved it in Seattle and I love it now.

I had a lazy ride back. I rested my head on Janet’s shoulder as we talked about a variety of subjects, from personality to ways people act to the trip that we are taking. We talked about how special it is to cook Thai food ourselves, and wonder what Alex and the twins will cook in a few days. I loved it. Our teacher was very nice and had an expression that went: Oh my Buddha!

I looked at the cookbook in my hand and the leftovers in Janet’s lap, and remembered smoothing the curry paste for the curry and cutting the tofu for the pad thai. I kind of missed it already. 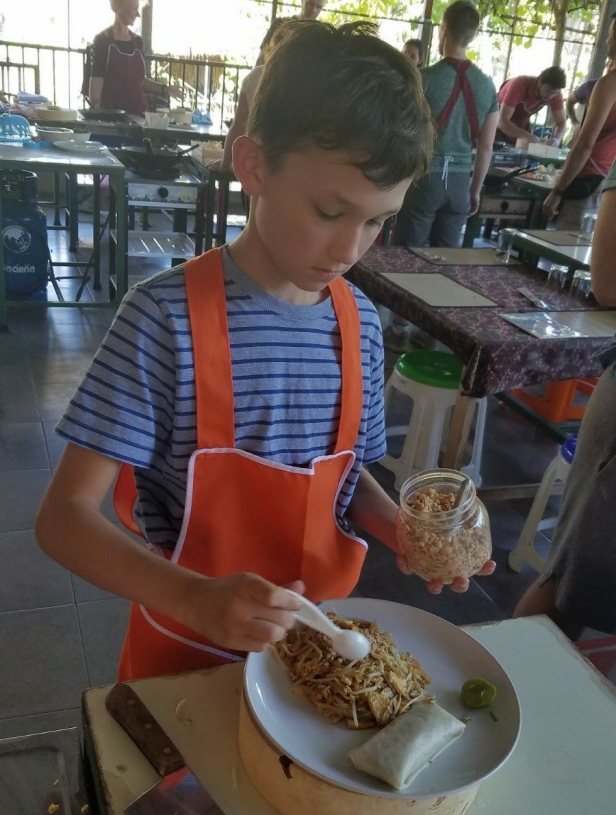