The Catmosphere Cat Cafe (Cat Cafe for short) is the cattiest place in the world! Well… fine. Not the cattiest place in the world. But still very catty. Julien is allergic to cats, so we are going while he is at his meditation retreat. For more information, read Julien’s blog: Meditation. The Cat Cafe is a cafe with cats hanging around. It is more cat based than it is cafe based, so there are cat toys on the ground. At the entrance, you would first have to wait until there was space for you, because it is a fairly small cafe, and it would be stocked with people if there was no limit.

The cats were so adorable. They just hopped around the cafe like they owned it, and there was only one toy they liked. The boxes. They had 23 main cats, plus a few that they don’t list on the list of names. There were many cat names including Apollo, Athena, Jean Luc, Cooper, Jango, Anakin, Anna, Barbarella, Han, Luke, Yoda, Ace, Catniss, Leonard… they were all impossibly adorable. It would seem as if they didn’t care that you gave them some catnip, it seemed they cared that they had some catnip. Well, It also applied to everything else.

These cats seemed very happy, and maybe just a little bit spoiled. We have encountered many cats on our travels, including the ones that roam the little alleyways of Morocco. Those cats are obviously not spoiled. I mean, what could less spoiled than eating of trash on the streets?

Sadly, there was a kitty in the Cat Cafe that had a problem. Luke. Luke was a gray cat with Scottish Folds. Scottish Folds are that style of cat ears where the ears are almost flattened and their cartilage is messed up. If you have cartilage in your ears that’s messed up, you also have cartilage in other parts that’s messed up. As Luke has grown older, his cartilage in other parts has become a bit creaky. However, the rest of the cats are nice and happy. The cafe had a spacey theme to it, so that is why it is called the Catmosphere Cat Cafe, and some of the cats are named after greek gods or Star Trek or Star Wars. Have a Catstounding day!

Below: All The Cat Names

Below: Cat On Shelf 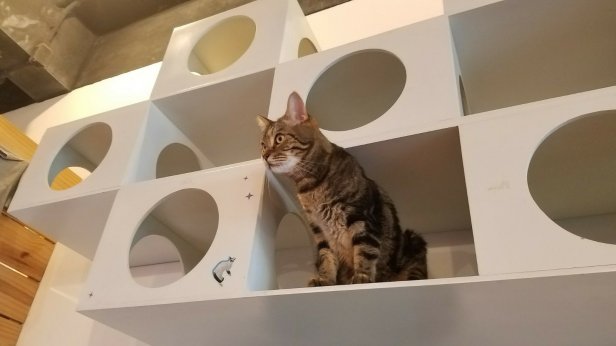 Below: Luke Snuggling With Another Cat

7 thoughts on “The Catmosphere Cat Cafe!”