A couple days ago, we went back to Blue Bear Skate Park, and met some of the other families and met new kids. We met a thirteen-year-old boy named Dylan, who joined us for soccer today.

Before we went, we studied two separate weather forecasts, which were vastly different from one another. At the time it was sprinking little droplets of rain, and we thought and hoped that the rain would let up once we arrived at the soccer field.

As we got to the field, Rowan, Dylan, Jasper, Kieran, Alex, and I began playing soccer, passing, running and playing around. Then it started to rain harder. We kept playing, for it is fun to play soccer in the rain. Then about two minutes later, the ground was muddier, the rain even harder, and our spirits less enthusiastic about playing soccer. Janet (our mom), Megan (Rowan’s mom), and Trina (Dylan’s mom) had been sitting in the outdoor seating of a bar that overlooked the field, under an awning, and were not one bit wet. Quickly, with no hesitation, we all ran inside to escape the downpour, and seek shelter.

After more time, the rain got harder. I didn’t think it could be possible. The soccer field was now a lake, and the sidewalk was a flowing river. We were almost the only people in the restaurant/bar, and no one else was coming due to the rain just flowing off the awning like a waterfall. We paid 50,000 Indonesian Rupiah (about $3.50), to be able to use the pool table for one hour. We ate, we played pool, and the adults had a long conversation about what it was like to live in Tanzania.

For dessert, we ran some 100m out of the restaurant, through the river that was the sidewalk, past the lake that was the soccer field, and across a street that had more water running down it, to the frozen yogurt place that we had eaten at a few days past (read my other post: A Taste of Home). I was happily soaked through, eating chocolate-raspberry frozen yogurt.

We ate there until the rain died down, said goodbye to Rowan and Dylan, and walked back to our house with the sound of leftover runoff following us wherever we went. On each side of our street there are these little gullies, about one to two feet across, and two feet deep. They are used to carry runoff away, and some locals dispose of their trash in them. They were overflowing. So much extra runoff was just pouring off the top of the gullies. After that cold and wet experience, I took a nice, warm shower, and snuggled under my covers.

Half the nights here the same thing happens. The temperature drops at about 5pm, then it starts raining. The rain gets harder and harder until it is raining so hard I don’t think it woud be possible for more water to be coming out of the sky. Then sometime after the sun has set, the rain goes away. That is Balinese rain.

Below: Soccer (before rain) 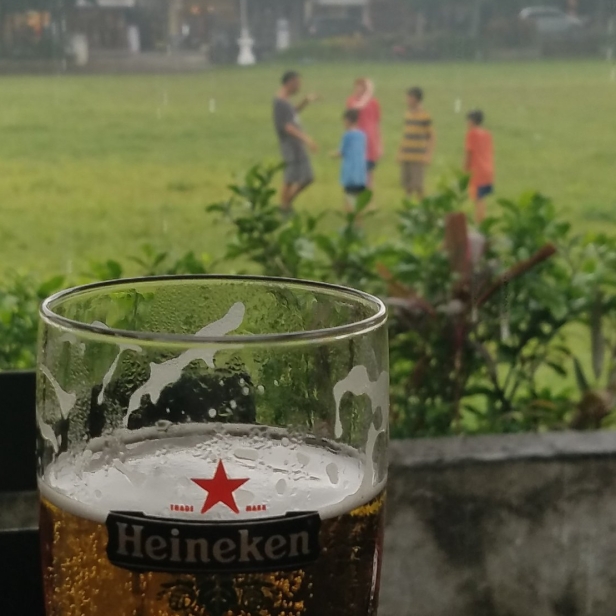