China is a very diverse country, having citizens from all backgrounds, all nationalities, and all religions. There are Muslims, Jews, Christians, and followers of the Taoist, Buddhist, and Confucionist philosophies. The temples we experienced today were ones of Buddhist and Confucionist values.

Waking up early and taking a subway to the Buddhist Lama temple was a tiring start. Though on arrival, it seemed a great place to begin. It was built during the Imperial Qing Dynasty, in the late 1600s as a residence for an imperial prince. After some time, the area was converted into a monestary for Lamas, which means spiritual teachers. The building is sometimes referred to as the palace of peace and harmony. As we passed the entrance courtyard area, we came upon crowds of people burning incense sticks and paying their respects to the Buddha, his teachings, and his disciples. We participated in the honoring of the Buddha by lighting incense sticks of our own, and dedicating some of our time to the activity.

We passed prayer wheels, prayer rooms, and pathways until we came to a final destination. A giant Buddha statue, carved from sandalwood that was dragged from Tibet and then coated in gold and pigment. It was quite a sight. Standing tall, towering above us, the top of his head almost touching the ceiling that seemed miles away. In the area there was one specific room that was really amazing. In front, there were a few statues of the Buddha, each of which had a special hand position that had a special significance, such as spinning the wheel of the darma, aka preaching. To the right, there were some of what seemed to me strange statues, of about 10 people, except, one had red skin, others had strange features. But they were all Bodhisattva (a person who had achieved enlightenment but has not died yet so is still here on earth). It showed that anyone could achieve enlightenment, no matter how big or small, no matter what background. It was beautiful.

At the Lama temple there was a bell tower that was vibrantly colored and elegantly shaped. But then we read the plaque and discovered that it was made several hundred years ago. How could something so old look like it was painted yesterday? In the west if we find some ruins or a structure or some art from a long time ago, we try to preserve it and maybe store it in a museum. In China, they took this bell tower and repainted it to make it look like it would have looked a while ago. The history of China is dynasty after dynasty, periods of war in between. But the Mandate of Heaven, the idea that by the will of heaven, rulers must earn their spot and rule wisely and fairly, is ever constant. In a sense, China has always been one dynasty, and is to this day. That is why they don’t try to leave the bell tower and not repaint it. It was built by their elders, and built by the same dynasty as the one that rules today.

Confucius was considered one of the world’s greatest thinkers. He was a teacher who taught people about moral value and how people should behave in a society. We visited a temple that housed his funerary tablet and a small museum on him. As I walked around the grounds, I could almost feel his living memory all around me.

Confucius also taught something that sparked my imagination. That shame can be good. That it can be healthy to feel shame, because it keeps you behaving and reminds you that you have a greater obligation to the people and society around you. I could very much see it that way, through those eyes.

Confucius also argued that respect was very key in an orderly system of governing. If the children respected the parent, the parent the elder, the elder the nobleman, the nobleman the emperor, and vice versa, then all would be well. If the family was doing good, then the dynasty would prosper forevermore.

Below: Pictures from Lama Temple

Below: Many different Bodhisattvas 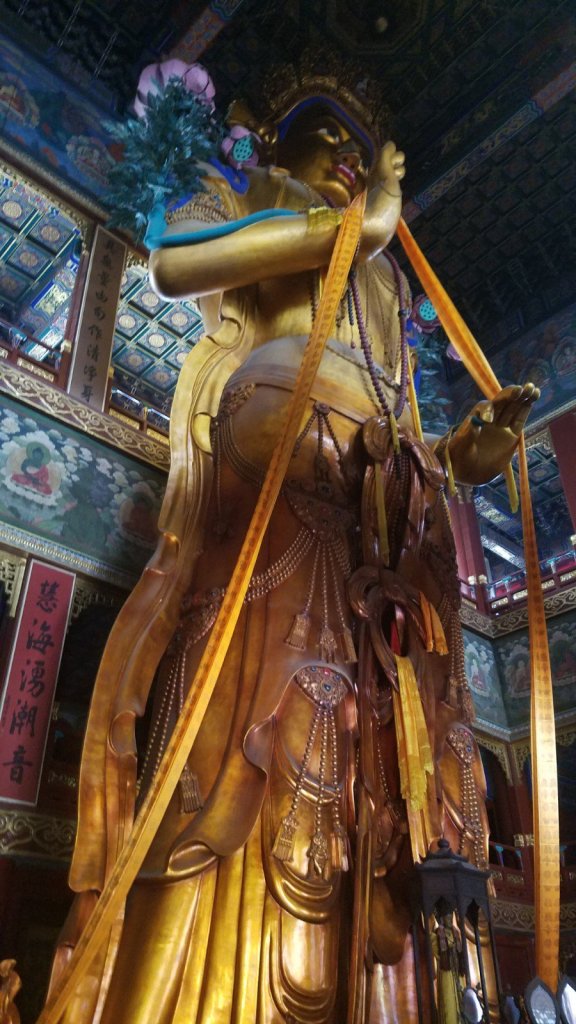 Below: Turning of the prayer wheel clockwise to refresh the intellect 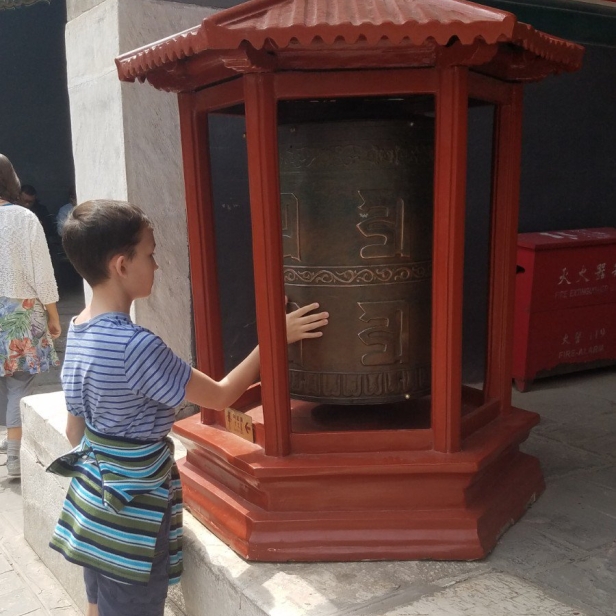 Below: Participation in Honoring the Buddha