At 8:16am, August 6th, 1945 the first use of an atomic bomb took place. We currently are staying in the very city that was hit by that atom bomb: Hiroshima. The memory of that atom bomb still stays with many Japanese today. When the atom bomb was dropped, it let out a tremendous force of energy, heat, and radiation. Aproximately 200,000 people died, both from the initial impact and the diseases that came out of the radiation that spread. If you look around at Hiroshima today, you see tall apartment buildings and a happy life for the citizens. But I cannot help but remember that 92% of this city once lay in ruins.

But life there continued. That history has not halted my thoughts of happiness and sheer excitment at being in Japan and Hiroshima. It mostly recovered. I was reminded of that as I looked at the A-bomb dome, a building that has remained at least mostly intact after the bombing, due to the fact that the atom bomb’s hypocenter was only 153m SE from the building, making it so that it took most of the force from above rather that from the side. But it looks like a ruin. There are only about half of the walls left. But what is famous about it is the dome. On the very top of the sturcture, there is an iron dome whose frame stayed intact. And, with the huge groups of colorful flowers, paved paths, and green lawns around it, it seems really memorialized. Like it is a tombstone that people have decorated, but still preserved the memory of the event that ruined the building.

As I looked at the dome, there was a horrible feeling in the air. A feeling of an awful time and an awful war. But there was also hope. The hope that something like that would never happen again, that humankind would never again have to commit such crimes against other people. It was one of the main purposes of the area. All this remembrance was to commemorate the lives that were lost, but also so everybody knows what happened and that there was a hope that we have together that this will never happen again.

We walked more along the winding paths, past other very modern statues to represent a certain group of people that died. The one we spent the most time at was the Children’s Peace Memorial. When the bomb was dropped, a two-year-old girl named Sadako Sasaki survived. Eight years later, at age 10, she developed leukemia, a type of cancer that she got due to the radiation the bomb emitted. Two years later, she died in her hospital bed. She was deeply loved by her family and by her classmates in school. Her classmates wrote to other schools requesting participation in a project to raise money to build a memorial. The memorial is in memory of Sadako, but also to all children who died as a result of the bomb.

When Sadako was in the hospital, she followed a legend that said if you fold 1,000 paper cranes that your wish would be granted. Even in the hospital after she became to sick to walk, she still folded cranes. Each of us three folded a paper crane and left it at the memorial in memory of Sadako and the legend. There was all sorts of art made out of paper cranes, some very small and others very big.

After that we moved on to the museum. Inside they had objects shown before and after the dropping of the bomb. One of the pieces in the museum that I remember is a bicycle that has been twisted and bent out of shape. There were some pictures and stories of people after the bomb. One of the stories was about Sadako. They even had a number of paper cranes that were folded by her. After folding so many cranes, she got really, really good at it. Even when she was running out of paper because her family was poor, she would use tiny scraps and fold them using a needle. There was a pair of cranes that were each smaller than a pencil eraser!

Back in Ubud when we had a TV, we watched a film called Day One which was about the making of the bomb. There was one scientist, Leo Szilard, who designed the bomb for the purpose of stopping Germany in WWII from making it. But once he found out that Germany was making practically no progress with it, he now needed to make sure that the USA didn’t use it in the wrong way. Many would say that the USA used the bomb in the wrong way.

People had their skin burned off, huge parts of it blistered. One person had their shadow burned into the sidewalk after the bomb hit. The heat it produced was that of 3,000-4,000°C. I couldn’t imagine withstanding that kind of heat.

I would rather not write about what happened to some people or the stories I read about in the museum. That kind of devastation, pain, and suffering is something I hope will never happen again.

Below: A-Bomb Dome before and after 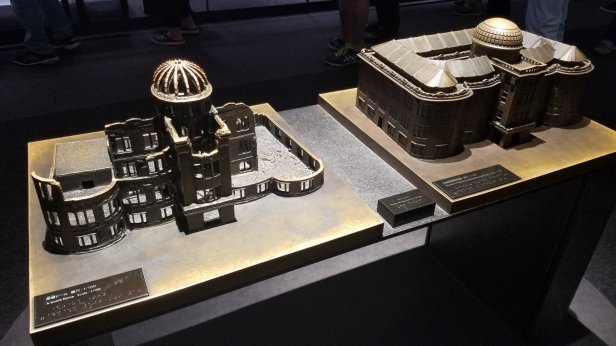 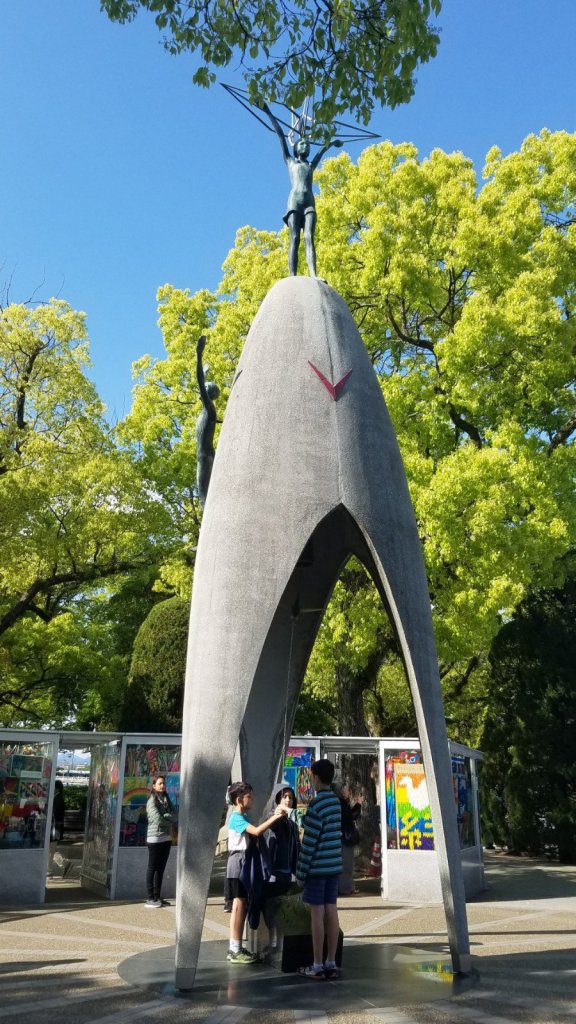 Below: Objects destroyed by the atom bomb

6 thoughts on “The Hiroshima Peace Memorial”