Today was a day of exploring New York. New York has very different etiquette then anywhere else I have been. One of the main principles of New York etiquette is to pay attention to if you are blocking anyone’s way. New Yorkers live a very fast-paced life. Get where you need to go, and do it fast. Since it’s such a crowded city, if you just slowly squeeze your way through the crowd and say “Excuse Me” quietly, you’re not going to get anywhere. So New Yorkers just get where they need to go.

In 2003, Janet and Alex went to New York and lived there for 2 years. Now they are back!

In New York, we saw Times Square. Times Square gave me a feel of New York. It was bustling. There were crowds of people all over Times Square. It had an interesting feel.

We also got to see some of New York’s buildings. We saw the Empire State building (from a distance), which I personally did not think was very impressive. It looked just like a tall, normal building to me.

We also got to see one of my favorite buildings in New York, the Flatiron building. It was a thin isosceles triangle that almost looks flat, and it has beautiful decorations on it. I don’t know what made it so beautiful, it just had a creative shape and neat architecture.

And for my conclusion, I LOVE NEW YORK!!! 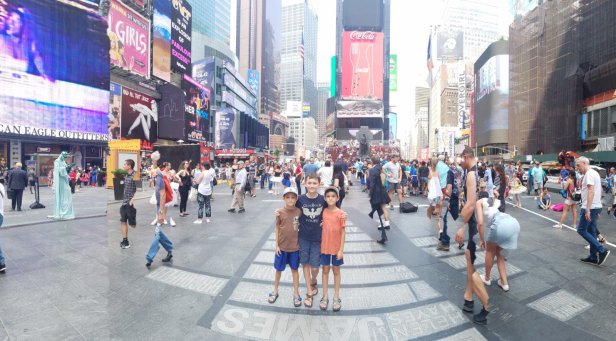 3 thoughts on “A Busy, Fast-Paced City”