Yesterday, we saw the Loucases and went to Ellis Island. Today, we went to an island called Governors Island and met the Loucases.

Governors Island is a beautiful island: it has lots of grass fields, and there weren’t any cars so it was so peaceful. We started with going to a place called “The Yard.” We had no idea what it would be like, but we had heard great reviews about it. The Yard turned out to be a junkyard/playground where you had nails, hammers, saws, wood planks, and things that didn’t relate to building that you could build off of. It was nice how parents are not allowed in, so you get to just do what you want freely. We found the Loucases and built a platform coming out of a wall. It sounds simple, but it took about two hours to make. With the time spent finding sharp nails, finding good-sized pillars (to support the platform), and nailing the nails in, it took a very long time.

After three hours of building, it was finally complete. Then we just joked around, doing weird things with the junk. We finally decided to play tag in the grassy fields. After a bit of playing we were so tired, literally turning off our energy and tumbling onto the grass. We played many other games, all ending up quite funny. In the end we had depleted all of our energy and we could no longer do anything besides doing nothing. That was our day of playing non-stop.

Below: Me Laying in the Grass

Below: Lavender Field on Governer’s Island 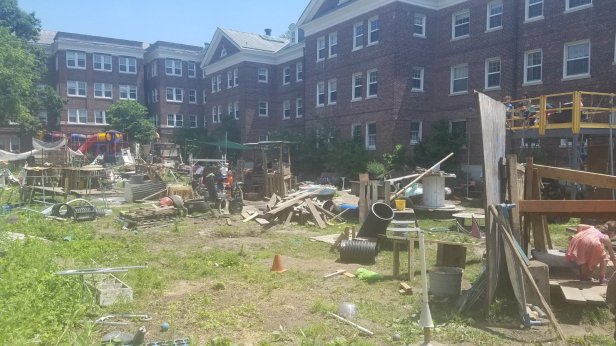